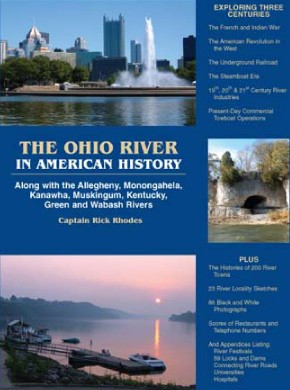 Published in 2008, “The Ohio River –In American History” also addresses the Allegheny, Monongahela, Kanawha, Muskingum, Kentucky, Green and Wabash Rivers. Three centuries of American History are woven into this book, including the French and Indian War, the American Revolution in the West, and our country’s expansion into the Northwest Territories. Also covered are Lewis and Clark on the Ohio River, the Underground Railroad, the Civil War, the Steamboat Era, and the evolution of the current lock and dam system. The rise and decline of 19th and 20th Century river industries, present day commercial towboat operations, as well as the colorful histories of 200 river towns are addressed.

This book contains 23 river locality sketches and 86 photographs, and hundreds of phone numbers. Five appendices list more than 60 river festivals, connecting roads on both sides of the Ohio River, 59 locks and dams, as well as local universities and hospitals.

Heroes of Years Ago,